C’mon in and help yourself to tasty resources

whenever I can, related resources & goodies on Amazon

whether for a crew, or for two, or just for you

{links within my items go to the sources shown in red – any links underneath items take you to Amazon unless otherwise indicated, and then only ones with the lock icon}

♦♦♦  Oh how welcome are these No-Cook Dip Recipes, so perfect for cooled-off evenings on the 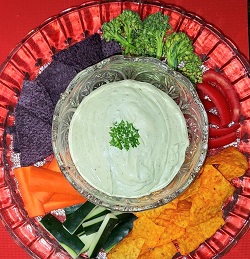 porch or patio or, OK, tucked deep inside the a/c. And it looks like many of the ingredients just may already be resident in your pantry or fridge. Here’s the one I chose – and while I generally like avocados pretty much pure, this fabulous creamy avocado dip is velvety, flavorful and a ready companion for so many other goodies. The prep suggests tortilla or pita chips and crudities, but also calls it into service as a topping for tacos, burgers, and sandwiches. Or, hmmmm, how yum as one of the tiers in 7-layer dip?  Southern Living

For the avocado dip, may want to start with a bit less salt.

any day we want our own Tequila Day {the national one was July 22}. And the really good news is a whole bunch of Tequila Cocktails for you to consider, each as summery as can be, hitting that refreshment vibe with strawberries, citrus, coconut, cucumber, pineapple, soda, tonic, or sparkling mineral water, and more.  Patron

♦♦♦  This recipe, first featured in our 04.27.18 Salon, seemed like a perfect follow-up to last week’s No-bake desserts item. Even with just two words, the title may evoke a whaaaaaaat? Yep, it’s Miso Fudge, and it defies all expectations. 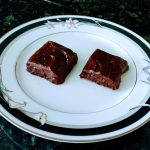 In a word, it’s good. In more words, it’s chocolately, creamy, soft, and indulgent. Gluten free too. And you don’t have to stop there.

This recipe is actually for Miso Fudge Brownies, where the fudge is spread atop the baked brownies along with candied miso almonds. If you want to make just the fudge, as I did, you only need to do step 10, and then let it chill out in the fridge.  Tasting Table

Other miso recipes on google

♦♦♦  Cocktail chat. Do your own sips or the drinks you serve perhaps have a star pedigree? Could that wine or spirit have a connection to, say, George Clooney, Bryan Cranston, Kate Hudson, Sammy Hagar, Blake Shelton? The story “24 Alcohol Brands You Didn’t Realize Were Owned by CelebritieS” tells all. And nice, flavor profiles accompany each and every one.  insider.com

Want to join the Buzz? Enter “Buzz” in the Subject line – sign whatever way you want to be identified

Appreciate anytime you can visit affiliate partners, linked below or in features above

Click link above for Zazzle homepage, Below for CS-Designed, Zazzle-Crafted Items {direct Zazzle links on these pages}

Want to be among the first to know about new Salons?

Easy! Just put “Preview List”  in the Subject line, and email me at the link shown above for comments & questions

Use Search, Archives, Categories OR email me at the same link above with “CooksSalon” in the Subject line

♦  Like foodie movies? Here’s the trailer for a new one titled “Bao” coming from Pixar about, yep, a dumpling that comes to life. Wait, will we be able to eat dumplings after this???  Watch

♦  Yes indeed, though we’re home cooks, we do occasionally like to eat out, maybe even pick up some ideas for our own kitchens – but how to find the restaurants most worth our time and resources, especially in unfamiliar territories? “Travel and Leisure” lets us tap into Anthony Bourdain’s experience to see how he does it. Bourdain’s cheat sheet

♦  CNBC has taken a look at impulse purchases, saying it can hit up our purses for an average of $5400 a year. And guess what perp ranks highest? “Most of the spur-of-the-moment outlays go toward food, with 70.5 percent of respondents saying that category was the major culprit.” Oops. One suggestion: “Taking a minute to ask yourself if you truly need whatever you’re suddenly eyeing can help stop you in your tracks.” {uh huh . . . did y’all talk to passionate cooks???}  The rest of the story

Do you like to keep up with high profile chefs? 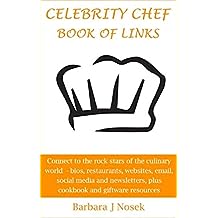 Now, so easy to connect with the chefs you know from their TV shows, top rated restaurants, and best selling cookbooks, over 100 in all.! Here, all in one Kindle book, is the scoop on their fascinating histories,  restaurants across the country, websites, email addresses, social media, newsletters, blogs, merchandise, and classes, as available. And because they’re links, the information is always up to date.

There may be other cookbooks this helpful, but pretty sure not too many 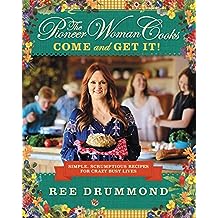 Ree Drummond, bless her heart, has created a cookbook where for every single recipe she shows step by step photos. The helpfulness also shows in sharing her go-to staples, 12 for the freezer, 15 for the fridge, 20 for the pantry.

There’s also a personal and personable vibe throughout the book thanks her talking-right-to-you style. And also because it features a bunch of family pictures, dog and horse pix, and chatty captions for each and every one.

And not too surprisingly, the book is cover to cover with the kind of hearty down home fare, appetizers through desserts, that she typically preps for her cowboy/girl crew on her Food Network tv show,”The Pioneer Woman.” This one from “Come and Get It” is simple and satisfying.

The first item in the “what you can freeze” article by Reader’s Digest mentioned in Tidbits last week is egg whites. This is the one in my Kindle book but with a slightly different focus, and I pass it along with a caveat. I have long used egg whites to treat simple kitchen burns, and in my experience when I’ve applied them fairly quickly there’s usually no redness, no pain, no blistering, and no problems.

But as I note in the book, apparently there’s some controversy about the practice so I urge you to research online to decide this for yourself. The freezer connection is because that’s where I keep the egg whites so I always have some handy, just pressing  my finger into them until a slight thaw can coat the skin.  50 Fun & Unexpected Food Prep, Presentation & Storage Tricks, 99 cents

A Peek at My Week

♦  Oh happy day. It’s not often I have leftover avocado, but on those occasions when I do I’ve typically bundled it up in Press ‘n Seal {those of you that have my “50 . . . Tricks” book know how many ways I’ve found to use this magical product}, but there would still be a bit of browning. Well this time I was wrapping up some ham in aluminum foil and after covering up the ham there was still foil left so threw in the avocado and a piece of tomato too. Next day, voila! pristine avocado. Should have known because that’s how I store celery {also in the “50” book}.

♦  Stress happens. Sometimes we know why, sometimes we don’t, but whichever it is, we would like to see it 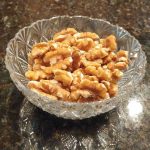 go away, right? I had read an article making the case for recapturing calm by “reaching for a handful of walnuts instead of a martini.” So recently when I started feeling some of the symptoms of stress I did indeed head for the walnuts. And you know what, woohoo! it actually lived up to its billing and will be a go-to from now on. But I do have a question: anything wrong with both???

♦  Well this was a pleasant surprise. While I do have a decent bagel place in town it’s a bit of an excursion so was intrigued by an odd recipe to make your own, calling for one expected ingredient {though I used the all purpose mix} and one unexpected {additional optional}. Surprisingly chewy and crusty! Note that even though the dough was a bit sticky, out of the oven the bagels came right off of the parchment paper. Also. and since this is the first time I made them no way of knowing if this had an effect, just to somewhat simulate the classic recipe, I sprinkled a bit of water before baking, two finger flings worth.  Easy bagels

♦  Found a way to use some of that miso fudge from last week. Melted it on pancakes. Yeah it was good.

♦  And speaking of hotcakes, they also helped me use up some more of that leftover Mountain Dew. There’s a  recipe on my pancake mix box that calls for melting a tablespoon of butter in a glass 9″ pie plate in a 450 oven, then pouring in a batter of one cup of the mix combined with 1/2 cup water and an egg, baking for 15 min or till tests done. This is a really convenient way of making pancakes but I found them a little flat. Ha! This time substituted the MD for the water and voila, more flavorful, better texture, nicely browned top {in the toaster oven done in 12 min}.

♦  Posted “Be a Better Business Writer in Nine Easy Steps” {mine, on Kindle} on Nice Life Books  – Thursdays