♦  Elevate your desserts. Literally. The secret behind “The $0 Trick for Bakery Style Desserts” is . . . bowls. Even before you click through, be aware that we’re talking here about presentation, not recipes. But intriguing nonetheless.

♦  Want to spice up your life in some new ways? Discard that first thought and have a look at “13 Next Level Spices and Seasonings.” Truth be told, it’s quite likely some of these will be familiar to CS-ers, and probably already in the pantry. But the good news is there are recipes links for each of these flavor boosters – e.g., stuffed roasted pumpkin, blackberry cardamom mulled wine, pecan breaded pork chops with beer sauce, dark chocolate ice cream with Sichuan peanut brittele, lots more.

♦  When you’re serving ice cold brews on a hot summer day – don’t forget the dog. Yep, Rover can join right in with the quaffing thanks to “Good Boy Dog Beer.” It’s brewed like people beer but not fermented, and thus non-alcoholic. Just to be good parents, may want to get your vet’s take on the beverage before sliding one down the bar to your good boy or good girl.

Inside the mind of a culinary legend

The behind-the-catering-scene book “Hotbox” featured in our 05.24.19 Salon opens with a guest chef dinner at the James Beard Foundation, which made me realize how little I knew about this iconic chef, widely regarded at the First Foodie, though I now know that title may more appropriately belong to his mom. I learned that fact and so many other revelatory details in the PBS film, “James Beard.”

What a fascinating story his life tells, from childhood travails, to mom’s influence, to cooking in exchange for invites, to his founding role in The Four Seasons restaurant and its pioneering devotion to seasonal cuisine, to his personal and professional relationships, to his authorship of about a dozen cookbooks, to his ascent to legendary status, to his post-mortem inspiration for the James Beard Foundation and Awards.

The tale is vastly enriched by lots of perspectives from those who knew him best. The DVD is about an hour long, part of PBS American Master Series, four stars on Amazon, Prime Eligible, just under $10.

In our 07.06.18 Salon, we featured Irish salad with cheese. Although it was a fine dish with its shaved

Dubliner, it wasn’t really a match for what I’d thoroughly enjoyed in a totally authentic Irish pub, crisp cool veggies topped with warm melty cheese. Onward. Decided to apply the idea to a Mex mix. The lettuces, green onion, black olives and serrano were cold from the fridge. Tomatoes room temp. And then melted cheddar, sour cream and lime wedges.

And making that one immediately gave me a taste for Mexican Tuna Dip, which I first discovered in Cabo San Lucas, and subsequently found right in one of my fave local restaurants. As the name implies, the lively mix of cilantro, onion, tomato, jalapeno, mayo is intended as a dip but is actually quite a treat on toast or lettuce.

It also occurred to me that the melty salad could be an entree with the addition of a bit of rotisserie chicken, and then avocado making it even more substantial. Btw, with cheese pretty much all over this one, it’s a bit more like that Irish salad that started the ball of fun rolling.

Meanwhile found this Kindle book on Amazon, covering Mexican side dish and main dish salads. It doesn’t have any reviews yet but we may not care – it’s free! Yay!

In one of the demos in the Beard DVD there was such an easy way to turn a humble sandwich into a pretty picture. It was his signature combo of onions and homemade mayo on bread that in some 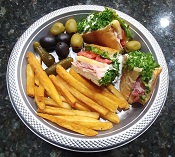 versions is cut into rounds, but here it was triangles.

Then the magic. More mayo was spread on the outside and then the sandwich edges were rolled in freshly chopped parsley. Depending on the filling, thinking this could also be dill, basil, oregano, etc.

In my take – pastrami, Swiss, lettuce and tomatoes, with parsley – as you can see I left one side ungarnished to contrast with the layers of filling. For you creative CS-ers, the variations are endless.

♦  I just loved that James Beard DVD, felt like just about anyone interested in food could comfortably have a nice chat with him despite his fame. One of the quotes in the film is especially endearing to us CS-ers who love freshness and flavor and hate wasting food and money: “It is true thrift to use the best ingredients available. Use them carefully and wisely and you will have less waste than if you searched for bargains and end up with a full garbage pail.”

♦  Just like some headlines can draw in the food-inclined, so for sure can some recipe names. Would you agree that “Comeback Sauce” might fall smack into that category? I first came across this reference in Food & Wine where it was served with grilled shrimp, and then in short order in the “Comfort Food Shortcuts” cookbook {02.22.19 Salon} where it teamed up with mashed potato crusted flounder. Not too surprisingly, google is all over it. Since as I’ve learned it’s a southern tradition, I made the really good one from “Southern Living.” Great on wings!

♦  So this is a good idea. In a recent episode, Ree Drummond not only cleaned out her refrigerator, but then, aha, moved the items with the closest expiration dates to the front of the shelves. I had recently washed my fridge from stem to stern and now, thanks Ree, added step two. Another way to help minimize waste!

Looking for something in CS? – scroll and check Misty’s previews OR enter the item in the search box OR email me at bjnosek@gmail.com