♦  Hey cheeseheads, here’s a prep you may not have encountered. Thank an Extra Crispy article for educating us about sirniki, Russian cheese pancakes that can be sweet or

savory. One frightening line, though undated: they were one of a few hundred recipes officially approved by the state. Eh? This google page is full of recipe sources.

♦  If you have one of the originals, throw it out. Wow, just came across a page I’d kept from Food Network magazine last year that says the discovery in Patagonia of 52-million-year-old tomatillos means that it and its cousins, including peppers, potatoes, and tomatoes – might have coexisted with the dinosaurs.

♦  OK, futher evidence I’m going through the “treasure trove” again. This survey {note on a scrap of paper – no source – nice job bjn} is actually from a year and half ago, but we’d like to think it’s only gotten better. It says . . . 83% of Millennials say they consider animal welfare when making food choices.

Would you like to know “how to cook basically anything”?

That’s the promise of the “Tasty Ultimate” cookbook, produced by Buzzfeed’s Tasty site. You can expect to find even more of what’s on the site, “more ‘Versus’ (head-to-head recipe 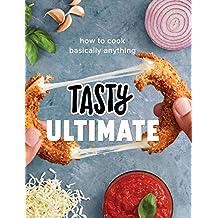 Whether pro or am, these 150 preps take you to the confident side of ingredients, entrees and sides, ethnic and vegetarian dishes, desserts, and the relevant techniques.

Extra for Book Lovers – here are the eight new “page turners” Newsweek thinks you should be reading this fall. Curl up with a novel

“The Most Important Book of the Day”

Well that’s a pretty clever play on words author and Beard-winning chef/proprietor John Currence used to subtitle his book called “Big Bad Breakfast.” And true to its title it’s singularly about breakfast, and the breakfasts are hearty and satisfying.

Open these pages to find baskets of baked goods, a bounty of egg dishes, pancakes & waffles {including homemade pop-tarts}, breakfast 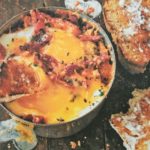 sides, sandwiches and beverages. And “breakfast for dinner.” And “cereals, grains and other pseudo-virtuous things.” 😁

In addition to the “master recipes,” the most compelling preps? Where to start? Sausage cinnamon rolls. 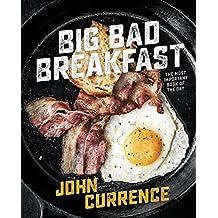 And for our feature: his signature egg bake {also shown}, an indulgent mix of meat, cheese, garlic cheese grits and fresh herbs. The recipe is per serving.

Toast a slice of whole wheat bread and cut into two 3-in rounds, placing one in the bottom of an 8-10 oz oven-proof cup treated with nonstick spray. Measure 1/4 ea – small diced ham or bacon, grits {recipe follows}, parmesan and cheddar, plus 1 T your choice of chopped herbs. Top the bread with half the meat and grits and a pinch of the cheeses and herbs.

Add the other toast round, then the remaining ham and grits, a pinch each of the Parmesan and cheddar, and two raw eggs. Season with s&p, sprinkle with remaining herbs and cheeses. Place on a small baking sheet and bake at 350 until the cheese is melted and bubbly and the eggs are cooked to your liking, 8-14 min.

Garlic cheese grits {serve 4-6}: Combine 2 c milk and 2 c chicken stock in a saucepan and bring to a boil over high heat. Stir in 1 c stone-ground grits and 1 t salt. Reduce the heat to simmer and stir constantly until the grits and tender and thoroughly cooked, about 15 min. Remove from heat and blend in 6 T small-diced unsalted butter, 1/2 c grated parm, and 1 t minced garlic. Season with s&p. Serve immediately.

A reluctant tip only because I wonder if I’m “busting” myself as the only one of us not already doing this. But it is a worthy one, so I’ll take the chance.

This was in a demo by one of the chefs on Food Network that included the fact that when you’re mixing mayo into other ingredients it should always be whisked smooth first. That way, no lumps.

So, yep, I do that now, but also with, e.g., sour cream {shown}, yogurt, {what else?}. The funny thing is I always whisked sour cream before setting it out as a topping.

Please join  me in my kitchen &  parlor

♦  I learned something this week, actually a two-fer. Both have to do with Prosecco, starting with the fact that this is a very viable alternative to Champagne when you’re serving a crowd and want to be gentler on the wallet. Second is the easy quality designation – DOC means grapes from nine different provinces in the region, and DOCG means a smaller growing area with special terroir plus higher standards for the vineyard and cellar.

♦  I led three lives – signed, curry cookie. Right after I came out of the oven I was quite dry, and shunned. After a few days, as happens with some other kinds of baked goods, moisture magically entered the equation and then I tasted great, and was cherished.

You might find my third life a little strange. There were about eight of us left that I guess bjn wanted used up. So she dissolved us in chicken broth, whisked in coconut milk and a bit of garam masala till smooth, then added in some cooked chicken. That may have been my best role of all. {It was delicious, full of flavor! – bjn}

♦  Quick kitchen pointer in the “equivalents” arena. Excavated this in conjunction with an upcoming shrimp/pasta recipe: 1/2 t of anchovy paste = 1 anchovy filet. Now we know {oh, maybe you already did}.

So far next week: learn from Ramsay {quietly!}, salvaging the pizza,