The cat with four successive mamas

If you count her birth mother, I’m her 4th mama, and that progression of parents may {or may not} explain the cat she became. Either a bratty hiding a sweetheart or a sweetheart hiding a bratty.

I want to make it clear she is in no way an aggressive kitty. A couple of other cats she’s lived with might beg to differ, and some people have witnessed a hissy fit here and there. But it’s notable she’s never ever hurt anyone, feline or human. I really do think the sweetheart vibe prevails.

So, Misty and her brother Sammo were rescued from a rural dwelling overrun with dogs and cats, all living outside. At the time they were just 8 weeks old. Whoever oversaw this deplorable situation I guess would have to be considered the second mother, though that title was hardly earned.

My mom lost her beloved Missy, also a stray, in 2001 and in short order wanted to give a forever home to another kitty. Or two. We went to an adoption event hosted by the local animal organization that had conducted the rescue.

We happened to be acquainted with the president of this organization and as she watched mom move from cage to cage, she asked her what she would like to have. Mom said she’d like boy and girl kittens. As it

turned out, Misty and Sammo were supposed to be there that day, but {bratty cat} Misty had pulled out her spaying stitches and couldn’t be released.

However, the president called the vet and though they had closed for the day, they agreed we could come by and see the kittens. Love at first sight! We brought them home about a week later, making mom the third mama and them permanent indoor cats. And btw, had those two cuties been at the adoption event, it’s a good bet they would have been snapped up well before we arrived.

Sadly, despite many months of almost daily fluid injections, we lost Sammo to kidney disease when he was just 5 years old. Checking Misty for possible similarities revealed that she has smaller than normal kidneys but to this day has exhibited no signs of disease. {Shown here as kittens – Sammo had just turned around to see what was whapping his tail, Misty waiting for another chance}

She’s actually quite hardy, has a very good {and eclectic!} appetite, uses her litterbox, plays with toys {some are her own definition}, easily navigates the steps to all three floors of our townhouse, watches tv, shows up next to me like clockwork at 5p for her suppie, leaps onto the tall bed in a single bound, maintains her 13-14 lb weight, grooms her shiny coat, sees and hears just fine. I pray she stays just like that until the day she packs her bags for the Rainbow Bridge, and yes I believe in that with all my heart.

A few years back, mom joined Sammo and I became Misty’s fourth mama. Since we had all, including my recently-lost Calli cat, lived under the same roof for the preceding five years, Misty was fortunately staying on in her own home

, just now spending more time on the middle floor, though still occasionally retreating to “her downstairs suite” or the loft.

Now about that hissing. Jealousy, possessiveness, territorialism? Whatever, she would sometimes hiss at me, and also my brother when he would visit. I should note it was not so much angry as indignant, and quickly swallowed if a backy scratch ensued. Again though, no actual aggression, no biting, no claw {yes, she still has them} swipes.

And this. When I first acquired Calli {also a rescue} as a kitten, I stopped by mom, at that time still in her own apartment, set the carrier on the floor and here comes Misty – hssssssssssssssssssss. So much for maternal instincts. 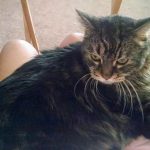 And now? Total lap cat for both of us. I can give her a hug, cut her nails, carry her to the scale or anywhere else, give her a little “help” into the carrier, brush her including her tummy, no problem. Purry, mellow, sweet. Maybe, no reason anymore for the bratty vibe.

Or is she just a fair weather kitty? Who cares, couldn’t love her more.

On Aug 20, 2019, precious Misty traveled to the Rainbow Bridge

and directly into the loving arms of  our mom, her real mom, #3

Very personal note: lost my precious Misty on Aug 20 after a mercifully brief illness. I’ve removed her photo, page links under the Preview, and Preview credit {from the homepage}, but her History Page and Gallery remain, links in the top bar. I’ve also added a note at the end of her History page. There’s now a FoodieCat just beyond the Rainbow Bridge, where golden catcaves are filled with soft pillows, moving toys, and platters of bacon and tuna, tended by hosts of angels ever-generous with hugs, kisses and ear scratches.