Kitchen Talk –  I was intrigued by the potato sauce that replaced Hollandaise for the eggs benedict that we featured in our 06.25.21 Salon 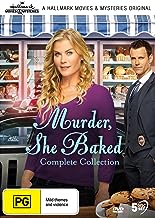 and wondered if it could be a blueprint for a tasty potato soup. Yep! Just as flavorful as it seemed it would be.

So, I started reading a food-themed novel and not too many pages in realized it sounded somewhat familiar. Aha! The author Joanne Fluke’s books had to be the basis for the “Murder She Baked” dvd mystery series on Amazon we featured last October. They provided nice light entertainment and thinking the books will too. See just below.

Want a tasty way to send your bottled salad dressing into somewhat healthier territory? Use half as much and then add a good splash of fresh lemon juice. So far have done this with Ranch and Avocado Ranch.

Minnesota town. Happenings at her Cookie Jar Cafe & Bakery, a meddling mom, frustrating sister, sometimes a boyfriend, sometimes two, and a fat cat add up to some nice light entertainment {except for the dead body thing}. You can find the books on Amazon. Shown is the first one in the series.

I need to note something about Goldbelly who we’ve mentioned here a couple of times. Make no mistake, the stuff looks fabulous, sourced from famous chefs, great restaurants, ethnic favorites – but, ummmm, $$$ – though should also add that even as you browse you’ll see orders flying in one after the other.

This week’s featured CS-designed, Zazzle-crafted item – For those who are ready for a party anytime – could be most of us, hmmm? – have we got a mug for you {or who}. Balloons, beverages, and the beat of the tunes fill the letters in a most colorful way. Find it here on our fun foodie mug page. And T-shirt too!

Nice, the recipe gives a nod to making your own recipe for the pastry or using store-bought. The topping sounds wonderful with the noted nuts, two kinds of sugar, cinnamon, salt and of course butter. Easy way to make a big dessert, though thinking it would also be welcome on the breakfast table. From Taste of Home.

Robert Irvine puts summer in a bowl where freshly shucked corn is joined by cukes, tomatoes, red and green onions, dressed with a vinaigrette cooled with a touch of sour cream, greened with cilantro. From Food Network.

Refreshing meets indulgence in these sweet treats. Fresh strawberry sauce is swirled with vanilla frozen yogurt, then into freezer pop molds. You’ll want to allow at least six hours in the freezer. From Eating Well.

Aka, Make Ahead Baked Greek Omelet, and with its onion, bell pepper, fresh dill, and seasonings it also calls to mind the best of a Greek salad. Easy too, since it can all be assembled the night before, some of it even days before. From The Kitchn

This is sort of like cheesecake and frosting and peanut butter all got together, turned silky smooth, and jumped into a graham cracker crust. Says chocolate topping optional {hahaha}. Also from Taste of Home.

No fear here. Traditional rilettes involve cooking seasoned meat slowly in meat fat in a low oven until it can quite literally be mashed and spread on bread. In this easy prep, though, seasoned cheese stands in for meat and – here’s the really good part – the fat comes from rendered bacon, and then the bacon is sprinkled on top. From Food & Wine.

Have a cuppa in Alexa’s room – recipes & more

You don’t have to have an Amazon Echo Show to tap into the particular tidbits we’ve linked below, drawn from its vast

Just pour a cup and let’s talk food with Alexa. Below are recipes recently displayed on the screen. Echo owners, also note that in many cases she guides you step by step through the prep . . .

Peanut Butter Cheesecake Bars  With its butter cracker crust and rich filling, this is one special treat. Ummm, I won’t be using the sprinkles though. Maybe chocolate chips!  From Food Network.

Ice Cream in a Bag  Well sonovagun. When she popped this up on the screen from Food Network Kitchen and I googled to get the link, made a discovery. This is a thing, with several others offering their own versions of this fun prep. All of them say, in effect, who needs an ice cream maker. The link takes you to the FN original and the other sources.

Sundowner snack, drinks, talk – whether for a crew, or for two, or just for you

♦  EatingWell always bring us such good and interesting information, both in the magazine and on their site. This chat with Curtis Stone, appearing on both, is certainly no exception as the chef talks food, wine, pantry cooking, kitchen gadgets and his work at counteracting childhood hunger.

♦   Thank you Southern Living for giving us such a seasonally perfect lineup of 70 No-Cook Appetizers. Some tasty salads too. Shown, ham salad snack {tweaked a little and topped with tomato}

♦   OK, I’m all for avoiding waste, re-purposing resources. But . . . ahhhh . . . this one by a Finnish brewery really tests our limits. I can’t bring myself to identify the ingredient used in the process, and even though I really couldn’t tell if it actually ended up in the beer, I will say the writer of the story noted that even after previously seeing so many oddities going into beer-making, a new beer like this could still catch his eye – “or make them pop out of their sockets.” So, your choice, can see it here. Thanks, I think, Food & Wine.

Want to join the Buzz? Enter CooksSalon in the subject line – sign the way you want to be identified

And for your consideration

Use Search OR contact me at bjnosek@gmail.com, subject line -> CooksSalon