♦  Bonanza for bakers! Taste of Home, another superfavorite recipe source, has introduced Bakeable, a one-stop destination for all things related. There looks like a lot of sweet stuff going on here, most under the banners of Baking Guides, Baking Essentials, Baking Recipes and Bakeable Community. I have not tried this myself, but if you’d 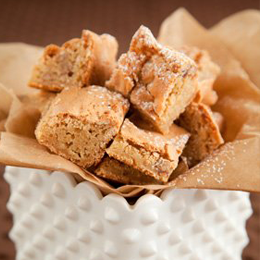 ♦  Well my CS friends, this sure looks to be worth a spot on the to-make list. Paula Deen actually posted this as a Super Bowl treat, but once you take a look, aiyyyyy, is there any occasion, any time of year, we wouldn’t want this. Her Brown Sugar Chewies are dangerously simple, which is to say too easy to make any time day or night with the stuff that’s likely already in your pantry.

♦  Ha! busted. Topline chefs may scoff at the very idea of a nuker in the kitchen, but MyRecipes tells all. The curtain is pulled back in their tale of “18 Unexpected Items These Chefs Always Microwave.” Some of this actually might be expected, but most live up to the title. One of the most surprising to me was grilled cheese, especially since the chef identified this as one of his favorite things on earth so I believe we can rest assured he would not use a technique that disrespected this classic sandwich.

When I was just a child {censored} years ago I read, and loved, “The Secret Garden.” For reasons lost in the mists of history I didn’t finish the book with only about 25 pages to go.

In more recent years a friend and I attended a book store opening and there on a kind of easel display stand among other books, was “The Secret Garden.” It was just too tempting – while my friend did her thing, I stood at that stand, believe it or not able to pretty well figure out where I’d left off, and finished the book. 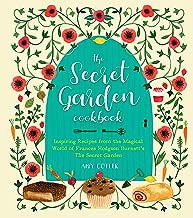 To this day the story, the setting, and the characters are still so fresh and dear. So, was absolutely delighted to come upon “The Secret Garden Cookbook.”

The dishes were inspired by the book and adapted by chef and culinary historian Amy Cotler from traditional Victorian recipes, and in fact are often accompanied by tidbits on the era’s food, eating habits, and cooking customs. Among such offerings as cheese muffins, potato snow, tattie soup, and “tiddy oggies,” I particularly found the Snap Baskets intriguing, with “magical” batter that once baked can be molded into, e.g., rolls or baskets and then filled.

The book says for ages 8 and up and “where necessary work with an adult” – but while I think youngsters would enjoy looking through the recipes with their notes and quotes, really all should be supervised. It’s 4+ stars on Amazon, Hardcover in new and used, and Kindle discounted.

What could be a more warm and welcoming taste of Ireland than a rich and hearty Irish stew??? And what a great way to celebrate St. Patrick’s Day.

Let’s be clear here, though. That “best . . . ever” claim comes from the recipe source. But once you look at the ingredients and process, and even before you taste it, you might see the potential of the promise.

And, ahhhh, have to be clear about something else. This is not your typical recipe, in that it’s not a list of ingredients and then the procedure, but rather a running chronology of both of those at once. Second, much like many passed-down grandma preps, why bother with pesky amounts.

And yet, and yet, here’s another of those magnetic headlines, drawing you in and prompting a give-it-a-go, especially with the added creds of coming from mom and appearing on IrishCentral. I have not made this yet, but if I do before next week will post the results.

“The best lamb stew recipe you ever had”

To the best of my recollection

And actually I have quite a bit of faith in the details here. It was on Julia Child’s tv show, not a rerun, back when this culinary icon was still among us.

Of course we wholeheartedly appreciated her straight-talking French techniques. But we also know she was subject to the occasional mishap.

In this particular instance, while the dish turned out just fine in terms of taste, something went bad with the surface, the appearance. All these years later I do not recall if it was a sweet and savory dish.

What I do remember quite clearly was her advice in either of those cases. To be ready to cover up a cosmetic oopsie {my word} on something sweet be sure to always have chopped nuts available. For savory, parsley. All better.

♦  Here’s yet another novel idea from Trisha Yearwood, which I saw on her Food Network show. Most of us could agree that cheddar and apples make a darn good combo. One of my long favorite recipes uses cheddar in the topping for apple crisp, and lots of folks just simply plop a slice of the cheese on a slice of apple pie. So the Yearwood twist – using cheese crackers in the crumble atop apple pie. Take a look at her tasty idea. {Well that was rude, tell you about great recipe in my files and then nothing, so thinking I’ll feature it for the 03.20.20 Salon}

♦  After I got past my annoyance with the author for not telling the rest of us what the heck amigurumi is, I became

quite captivated with this Japanese art of crocheting items made 3-D usually with fiberfill. In this book, titled “AmiguruME Eats,” the items are mostly food but also plates, bowls, glasses, flatware, pots & utensils.

–  The cuteness factor notches even higher when there’s a face, and yet another sense is brought into play with the addition of scents. Thinking this could even be great fun as a wall decoration, on a plate or other surface, for your own kitchen or a hostess gift. Btw, the book does include crochet lessons.

♦  So, guessing we can all agree there’s nothing wrong with french fries just as they are in all their golden glory. {Just ask Betty White!} But, if at some point you’d like to add just a quick hit of kicked up flavor, you might do what I did tonight. After they’re nice and hot, melt on some pepper jack. Oh yeah.

So far next week: Savory sauce on steak is just the beginning, Irish hangover cures, “Recipe for a Perfect Wife,” omg made the shrimp & grits

Scroll & check previews OR use the search box OR contact me at bjnosek@gmail.com

Use the same email, enter CooksSalon in the subject line – see the Let’s Chat tab for further details