♦  Last week we featured lava cakes, a restaurant specialty you could make at home with the Ghirardelli recipe we included. Ready? Here are a lot more thanks to Taste of Home serving up “30 Restaurant Copycat Recipes Ready in 30 Minutes {or Less!}.” Now you can make in your very own kitchen such dining out specialties with recipes for, inspired by as they say, Cheddar Bay biscuits, Culver’s butterburger, KFC Crispy, Olive Garden breadsticks, Orange Julius, Cheese Factory Spicy Cashew Chicken, Shamrock Shake, and lots more.

♦ Tut tut {lorgnette to eyes}. My dear, do you not know the “11 Fine-Dining Etiquette Rules You’ve Probably Broken Your Whole Life.” Some are just plain practical, others I think we may regard as optional. About the napkin, e.g. – long ago a tuxedo-ed server showed me the trick of laying it flat in the lap, then folding the far edge back about a third, providing a handy hand-wiping area that also keeps your dress safe. And then the one about always leaving one bite {hahahahaha}.

Btw, did the writer take this all super seriously? There might be a clue in this intro comment about learning the “few rules of formal dining that you can follow even if you’re hosting in your own home, serving delivery that you are trying to pass off as your own cooking.”

♦  Can you make a fake? Not create a fake food item, but rather know one when you see one. Cooking Light has identified for us seven foods that are on the suspect list for not being what they seem, and then telling us what to look for to distinguish the genuine article from the impostor. It’s all here in “The 7 Most Common Counterfeit Foods and How to Identify Them.”

So easy to turn your kitchen into Celebration Central for St Pat’s Day. And that’s whether, as we say in our motto at the end of every Salon in a slightly different context, it’s “for a crew, or for two, or just for you.” 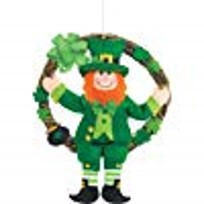 Stores are already overrun with festive possibilities,and of course there’s also always good ol’ Amazon. Shown here a few of the possibilities offered by the latter.

That adorable garland is just $6.99, Prime eligible. This sprightly fabric leprechaun is actually a door hanger, but what a great theme setter for the kitchen or dining room, $29.99, Prime free delivery. Or brighten up the whole scene with these battery- 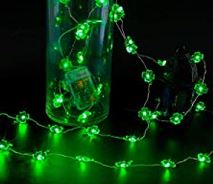 Bring it all to lunch or dinner with paper plates and cups, napkins and flatwear. And how about something Irish to put on those plates? Happy St Pat’s!

To give credit due, it was a same-named recipe in “The Unofficial Downton Abbey Cookbook,” featured in our 02.14.20 Salon, that started this process. My favorite version was in a cookbook that apparently was swept up in a donation to a culinary instructor.

The one in the Downton book came close to the one I’d had, and inspired a further search. Thank you Taste of Home for providing the simple and similar prep I was looking for.

A ‘fess up though – to bring it even closer to what I recall I tweaked somewhat. Sauteed the onion in a half stick butter. Brown sugar instead of white sugar. Red wine instead of vinegar {thus the title here vs. the name on the recipe}. If it dries out too much while cooking pour in a bit of stock, and if you’d like it a little sweeter increase the sugar or, as I did, add a bit of syrup.

Sooooo happy with this dish. Hope you will be too.

A tasty way to switch out carbs

Thanks to AllRecipes, I found a great remake for hash browns. Now, if I promise there will also be a rich potato version, can you please promise you’ll give this a chance after you read . . . cauliflower.

Their Dec/Jan issue had side by side preps for Keto Cauliflower Hash Browns and Loaded Breakfast Potatoes that were made with regular hash browns. I liked the cauliflower idea but wanted it a little richer like the potato one.

Wait, how about plugging the cauliflower into the potato prep???

Below you’ll find both original recipes. I made the potato one with 2 16 oz bags frozen florets, thawed and blotted, just cutting down the largest ones. I used a cup of cheese in the mix and then another cup for the topping, and also 2 T chopped chives “borrowed” from the cauliflower prep. Pretty good, maybe just a tweak or two needed.

♦  Thanks to a friend’s recent excursion followed coincidentally by a Smithsonian article I’ve become familiar with the archaeological/architectural wonder in Jordan known as Petra, site of an ancient and remarkably advanced culture, where up to 30,000 people dwelt among temples, theaters, gardens, tombs, villas, Roman baths, trade routes and marketplaces. The link leads to much more detail.

–  Bringing it into CS land, what was on those tables over 2000 year ago? Oxen, sheep, chickens, wheat, grapes, olives, pomegranates, sesame, often starring in great feasts and banquets. And . . . “the king holds many drinking bouts in magnificent style – but no one drinks more than 11 cupfuls.” {!}

Whenever I see a way to salvage otherwise trash-bound food, like to share it with you. What happened is that I was making my butter cookie recipe with the addition of lemon curd, but that changed the timing and so the first batch was underbaked. So, beat them smooth with an egg, a bit of flour, baking soda and peanut oil, dolloped into a skillet and, voila, not bad pancakes.

♦  Let’s play trivia. On a recent episode of The Kitchen, I saw Geoffrey Zakarian made two take-offs on the non-alcoholic beverage known as a Shirley Temple. One was a Dirty Shirley, a cherry flavored gin drink. The other, with a similar flavor profile but no alcohol, he named Don’t Call It Shirley. Here’s the trivia – what movie does this latter one refer to and what is the exact line?

Scroll & check previews OR use the search box OR contact me at bjnosek@gmail.com

Use the same email, enter CooksSalon in the subject line – see the Let’s Chat tab for further details