CS friends, and help yourself to tasty resources!

♦  Here’s what you’ll find when you scroll below  ♦

♦  As you cook and bake, bake and cook, did you know you can find a whole bunch of “how much?” answers on our Measurement Equivalents page? You’ll find spoons to spoons, spoons to cups, cups to ounces, plus drops, pinches and dashes. There’s also a link to the AllRecipes conversion chart for baking pan sizes. And finally, a list of common ingredients translated to spoons and cups, ounces and pounds.

♦  PBS has you covered with some nice holiday cooking shows, and others. The first one – this very night – launches season 2 of No Passport Required, a culinary journey across the U.S., starting with Seattle. Each week super chef Marcus Samuelsson, he of the incredible backstory {his book}, introduces us to a particular city’s take on American cuisine and culure.

–  On 12.20 we take a seat at tables across the country with Lidia Bastianich. Also on 12.20 join the celebration of the America’s Test Kitchen 20th Anniversary Special {looks like it might be on tonight too}. Then on 12.21 it’s feasts and more on their Create track’s Joy to the World. Finally, on 12.22 virtually open The Houston Cookbook. Check your local listings for all this foodie fun.

♦  Nice little tip I found, actually in the HGTV Magazine. A bit of a stress buster as you prepare holiday feasts. In essence it says, concentrate primarily on one main dish, and then supplement with starters and sides you can make in advance and serve at room temp. And may I add . . . some prepared dished from your market make that part even easier, and no guilt allowed.

Celeb chef recipes – and it gets even better from there

World renowned chef Jean-Georges Vongerichten has given us a memoir that’s as easy to consume as his acclaimed cuisine in its multi-awarded forms. We’re virtually at his side as his takes his apprentice test in France, travels the world with the French army, polishes his skills in a succession of Michelin-starred kitchens, suffers setback, and celebrates triumphs.

And regarding the setback and triumphs, and especially the very last one – with his team. Always with his team. And with that team, he now oversees, directly or via a license agreement, about 40 restaurants around the world. 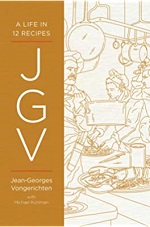 A personal note is sounded right at the start when he tells us why he gives such enormous credit to his mom, not only for her cooking mastery but as well for her devotion to quality, service, and a solid work ethic. The latter was essential since she cooked lunch and dinner for a large family and on-site business staff, leading him to say about the home kitchen, “I basically grew up in a restaurant doing 60 covers a day.”

The book is called, “JGV / A Life in 12 Recipes,” and the subtitle is so relevant because those preps mark notable moments or turning points is his storied career. They may seem long, but part of each one is like a one on one chat about the recipe, including his recounting of the POTUS-noted pea guacamole controversy. I’ll be making his carrot sauce for seafood, and will of course share.

When you see that the book rates 3 1/2 stars from six people, I encourage you to look at the detail. There’s a 3 star review that takes issue with the editing, then a 5 star and 4 star. The other three are ratings with no reviews and no sourcing. Here are some other views. All in all, I found this such an enjoyable and enlightening read.

This is sort of a hybrid celeb chef creation. With all the root vegetables, it’s primarily Curtis Stone’s version and what I particularly like about the way he makes it is that the veggies stay in instead of flavoring the broth and then being discarded, and the bread stays out, which is to say served alongside the soup rather than cooked into it.

And the demo in the link below shows a collaborative effort with Stone and Rachael Ray, during one of her 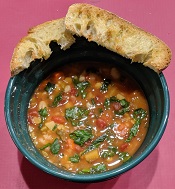 broadcasts, both handling the prep. But then there are other cooks for this broth {and, no, they didn’t spoil it} too, touches by Giada and Ann Burrell.

So, building on Stone’s recipe, I added a can of diced tomatoes and {my own contribution} a cup of vegetable juice in place of 2 cups of the chicken broth. Also spinach {which Stone condones} instead of kale, and a lot of it, half a bag in fact, along with a half package of fresh basil, as well as a half teaspoon of crushed red pepper.

A good crusty bread is the perfect accompaniment, and Stone’s recipe calls for ciabatta which would be great. But I found a Tuscan loaf in my grocery story, and that seemed only natural.

“Easy does it” appetizers or mini desserts

In our 07.12.19 Salon we featured phyllo cups and fillings, one of the Tasting Panel selections. These handy little holders are available already shaped and baked from the grocery store or Amazon {despite seeming quite delicate,

mine from Amazon arrived fully intact}.

Shown here, just a couple of possibilities from opposite ends of the spectrum. An appetizer filling of eggs scrambled with sausage, onion, green pepper and cheese. And then a dessert version with a layer of caramel {from a store-bought tub} topped with a layer of ganache, though truth be told you could certainly just spoon on a thick hot fudge from the fridge, such

Want to make it even easier? Put out the empty shells and a variety of fillings and let your guests create their own little dessert buffets. That also would mean no waste from shells with moist fillings that would not survive as leftovers.

See more possibilities in the July Salon linked above and a Food Network slide show linked below. All so festive and perfect for holiday get-togethers and all such fun whoever fills them up!

♦  One of my favorite things to make, and give away, this time of year is edible wreaths. Really pretty easy, basically

the same prep as the classic Rice Krispies treats, but made instead with corn flakes to simulate, along with the help of some green food coloring, foliage. The original Kellogg’s recipe calls for making this cookie size and sometimes I do this. But more often I make them a little bigger or a lot bigger. Also in place of the red hots I use red M&Ms, attached with a bit of sugar water. And one time, instead of wreaths I shaped the entire mixture into a Christmas tree and then used all colors of M&Ms as ornaments and melted chocolate for the trunk.

♦  Here’s what happened. Had taken some of the turmeric eggs {07.19.19 Salon} and a container of rice out of the freezer to make, along with some cooked salmon, kedgeree for breakfast, only to discover two surprises. Ham slices in with the eggs and some corn nestled next to the rice. Had also taken out a container of my cheesy potatoes as a side dish for the dinner steak. Cut up some onion to start breakfast and the wheels began to turn. Hmmmm. Cheesy potatoes, ham, corn, onion – sounds like a pretty good hash to me, along with salt & pepper and some parsley, sauteed in butter, paired with salad. Yep, parts of breakfast became dinner, and to counterbalance, that dinner steak became the next day’s breakfast, nestled alongside eggs & toast.

♦  So, we end the last of our regular Salons for the year on sweet note that turns a holiday classic into a whimsical

treat. The prep’s pretty sweet too. Cooked sweet potatoes, mixed with melted butter and brown sugar, formed around a marshmallow, rolled in crushed cereal, baked until heated through and a bit of the mallow peeks out.  I used peanut butter Chex but next time thinking pecans or walnuts. Good & fun!

Next week: Top gifts for cooks featured this year in Marketplace, many with short shipping times

Scroll & check previews OR use the search box OR contact me at bjnosek@gmail.com, also valid for questions & comments – see the Let’s Chat tab for email details