♦  If you like to bake, you might also like to take a look at this article posted on Well Done. You’ll find guidelines and fixes for such aspects as reading instructions, measuring, heating the oven, ingredients, mixing, pans, under the banner “18 Bad Baking Habits You Need to Stop.”

♦  If you’ve ever been to a French bakery or cafe, whether here or there, chances are good the menu featured the country’s classic open face sandwich, the Croque Monsieur, basically ham & swiss on good toasted bread sauced with bechamel. Food and Wine brings us the prep for a version called Croque Meurice after its origins, and what’s interesting is that it taps into sheet pan convenience. Btw, if you cut these large enough and top each square with a fried egg it would be a handy take on Croque Madame.

♦  Potato art – This is too bizarrely funny not to share. It is about food. But not as food. A new Internet sensation involves posting videos of putting makeup on, yep we already tipped it, potatoes. Although I guess as we think about it, that’s maybe a small step from the years ago kids game, Mr. Potato Head. Thinking now, this could be fun – if we used food color pens they could actually be served as a party dish. Thanks, Irish Central, for the chuckle.

Little late with a Valentine’s gift?

There’s a good chance Amazon can help. Almost anyone, I think, would appreciate a 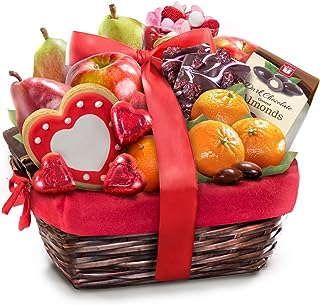 In the links below, the first one leads to everything that comes up for chocolate gift baskets, the second narrows the selections to baskets specifically for Valentine’s Day, and the third lists only those rated four stars and up. At any level you can also customize in additional ways.

Btw, the “container” isn’t always a basket, sometimes a box, tin or tower. Of course check out the delivery dates but many if ordered now will arrive before the big day, including this one.

Need something even faster? Browse lots of instant gift cards on Amazon

Well this whole tasty sequence began with a visit to a site I really like called MyRecipes. The draw was a story on desserts made with Girl Scout cookies {link below}.

So then I hit Google to see when the cookies are available and that led to several discoveries. First, on the Girl Scouts site you can enter your zip code and get a big listing of dates and places for the booths.

Second, there are also cookie-based recipes on the site. Shown here are cupcakes made with Thin Mints which are crushed and mixed with cream cheese

for a filling inside chocolate cake topped with ganache.

Another revelation came in the Google search, and it’s this – Girl Scout cookies are available on Amazon. Just to check I clicked on the Thin Mints and there doesn’t appear to be any “season” for them which is to say they seem to be available year ’round.

Skeptical, but my reason may not be your reason

Either way, it is an interesting idea. Tapping into a tale with the maybe slightly hyperbolic headline, “How to make any cake 1,000 time better” – with the answer being, folding in whipped cream.

The result it says, is a light consistency . . . a lighter texture,” and that where they lose me because I like desserts that are. ummm, toothy. But I realize some of you, dear friends, do prefer a lighter touch and a link is here for you to see the details.

Meanwhile, we also discover that the idea was inspired by the cookbook, “BakeWise,” which “won the James Beard Foundation Award for Best Baking and Dessert Cookbook in 2009.”

♦  So, a package of rye bread that is supposed to close with a sticky tab – didn’t. As a result, a good four slices turned zwieback-y. Didn’t want to waste it, so hello Google. The solution that was most appealing was to turn them into croutons, which is exactly what I did, sauteeing cubes in a garlicky mix of butter and peanut oil. Turned out to be great toppers for butternut squash soup, pea soup, and really any salad.

♦  And about the butternut squash soup, now have my final version. Truth be told the preceding variations were good, but the “winner” was the one that most let the title veggie take an undisputed starring role. It starts with about a 3 lb squash, baked until

nutmeg. Let this simmer while you peel, seed and rough cut the squash, and then mash or blend it smooth with a 1/2 c cream.

–  Whisk in the squash scoop by scoop until blended, and then add 1 cup Italian shredded cheese. Whisk until melted and mixture is hot. Serve as soup or, as originally pursued, over pasta as shown here topped with a bit of parm and parsley.

♦  I don’t make a steady diet of “Chopped” on Food Network, but did tune in recently and learned about an ingredient I’d never heard of before. Have you? It was choclo, a large kernel style of corn grown in Peru. The contestants did some interesting preps with it which you can view here {full episode}.

{new, and still doesn’t quite have all its ingredients}

So far next week: