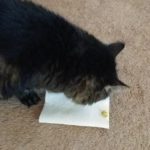 ♦  More sheet pan recipes. Folks seem to be loving this technique, whether for an all-in-one meal or a single component. Here’s one from Tasting Table for whole salmon with the most incredible mix of flavors, flanked by a side dish, demo too! {Btw, plank salmon just means one side}  Salmon   And from chef/wine guy/syndicated radio host Les Kincaid, roasted artichoke salad {this edition of his newsletter is actually for Thanksgiving – plan ahead!}.  Artichokes  And for anyone who loves breakfast like I do Foccacio with bacon, eggs, etc also from Tasting Table. 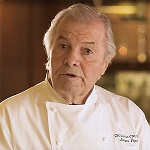 ♦  As part of the recap of its Food and Wine Classic, an annual June event, the magazine imparted an egg trick that had been included in a demo by Jacques Pepin and daughter Claudia. And that is, how to tell when a hard cooked egg . . . is. No word on how to not burn your fingers.  Is it cooked?  Food & Wine {Btw, did you know Pepin is also a fine artist, and a quite accomplished one too.}

♦  I saw an idea in the Well Done online newsletter that I thought could be easily adapted for any of us. It had to do with using up herbs, either from the store or maybe those that ganged up on you from your garden. And there was a recipe, but I’m thinking you could just substitute any of the herbs, or a mix of them, in your favorite pesto prep. Then scoop atop whatever would go best with the herbs used, say on lamb if mint is dominant, or fish if it’s parsley, atop chili for cilantro, and of course basil for classic pesto pasta. Whatever herbs are then playing a supporting role can add an interesting extra dimension.

If this is how you’d like to eat, “healthy, but with an occasional bit of decadence”

. . .  then this is sure the book for you. Lindsay Maitland Hunt has crafted 131 recipes that while mostly veggie-centric, do manage to sneak in “the occasional dash of meat, dairy, and decadence.” 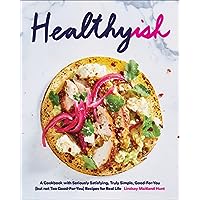 And because the emphasis is on simple, familiar ingredients, the preps are typically quick, easy, and inexpensive. Just as good, simple means fewer pots and utensils, speedy cleanup.

“Healthy-ish” can stay by your side throughout the day with dishes for all three meals, snacks and treats too. Some that caught my eye: chorizo breakfast tacos, summer corn soup, one pan crispy chicken with herbed

Something I personally like is the good array of breakfast/brunch dishes. And as well, the beautiful colorful photos for every recipe.

“Reader Extra” – this isn’t just a good book, it’s one that gets better with every chapter – think a Hemingway-like tale of a cranky, in a funny Foghorn Leghorn sort of way, widower whose basic decency emerges over time despite himself. “A Man Called Ove”

You don’t have to be sons or daughters of Éire

. . . to appreciate a good ol’ Irish food idea. And this one is one of my favorites.

During these toasty summer days, a salad is indeed a boffo way to turn lunch or dinner into refreshing meal. But let’s face it, sometimes you want that little something extra to perk up the assemblage of chilled veggies, especially if this is your main dish.

I had a great revelation at an Irish pub here that btw could confidently claim authenticity since every bit of it was brought over from Ireland, and many of the ingredients and beverages also had passports. So about the salad – atop the colorful array was the surprising – and welcome! – addition of cheddar cheese, a generous amount too, heated enough so it was melted but no so much that it would wilt the greens.

This recipe from Kerrymore actually does call for melted cheese – even though the image doesn’t show that, but  rather slices that were probably softened. Guess you could do that too, but it would certainly not have the effect of melty cheese all over everything.

The recipe also includes a prep for vinaigrette. But you could of course dress it with whatever you like best on your salads. And in fact you could just apply the idea to any of your own favorite salads.

What host wants to spend time mixing drinks or expecting the guests to be DIY-ers? Probably none. So this is good – prep a batch or so pre-party and then relax, mingle, enjoy, keep an eye on the good jewelry.

“Tasting Table” can help you make it easily, and serve it responsibly. Let’s party cocktails

♦  It’s no big surprise that coleslaw is a match made in heaven with bbq. But . . . recently was serving bbq chicken and found that, bummer, no cabbage, not even store bought slaw. So, thin sliced the crispier part of lettuce, added some extra crunch with thinly sliced celery, dressed with mayo, ranch and horseradish. And then on a whim also tossed in some thinly sliced peeled and seeded cuke, which turned out to be a winning idea, that freshness an absolutely perfect foil for the richness of the q.

♦  Remember frico that we talked about in the May 11 salon? Well the current edition of “Rachael Ray every day” magazine had a boffo idea that I tried this week, and that is plopping a fried egg on fried {frico} parmesan. Now, they cooked the 1/2 cup of parm in a hot skillet for a minute or so till bubbling then put the raw egg on top and covered the pan. I didn’t have faith the white would completely cook so I did them in separate pans, hot for the cheese, low for the egg. Really good!

Also, her recipe called for serving the egg/cheese atop a bread salad. Ever since a couple of trips to Paris I do really like salad with eggs but I did it more in the French style, mixed greens lightly dressed, and next to the eggs. Lots to play with here.

♦  Posset nirvana! After discovering  this smooth creamy – and so easy! – pudding, and then making a lime version that I chatted about in last week’s salon including a link for recipes, decided to try another. Tangerine! Oh Myyyyyy.

Btw, it’s too funny watching Misty approach the little bit of posset I put on my finger for her to lick. Her tongue is attracted to the cream, but her blinky eyes say, blaaah, citrus. By the way, checked this and any citrus in large amounts can be detrimental to cats. A little shouldn’t hurt, but maybe best to just avoid {listen to the eyes}.